About George Kall – Founder and President

George Kall Loves What He Does

George loves helping homeowners improve their homes and transform them into their ideal homes.

He loves leading Metro’s team and working with homeowners developing unique and creative solutions that are just right for their homes and families.

And when projects are finished, George loves seeing homeowners delight in their newly remodeled homes.

George’s vision for Metro Building and Remodeling Group was, and still is, to be the kind of remodeling firm he would want to hire if he was a homeowner remodeling his own home.

George defines that kind of company as one that would:

George is Proud His Vision Has Been Recognized by the Industry 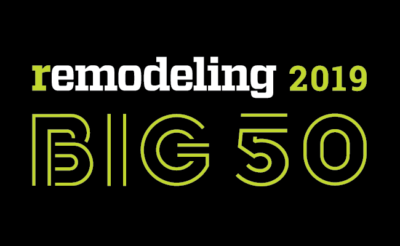 Among the many awards George’s company has won, one that he is most proud of earning is Remodeling Magazine’s prestigious Big50 award.

Receiving the Big50 award is considered by most in the remodeling industry as being installed in the industry’s hall of fame. Only 50 remodelers from across the country receive this honor each year.

Earning this distinguished award also gives George access to many Big50-only opportunities to learn from other Big50 winners and other industry leaders, and to have more influence in the industry.

Before college, George knew he wanted to start and own his own business someday. So, he took a dual major in management and finance in college. But he also knew working behind a desk all the time was not for him. By the time he graduated from Virginia Tech, he knew what type of company he wanted to own. A home remodeling and custom home building company.

George understood, before starting his own company, he first needed to learn all he could about the industry and running a successful company. So, he set out to learn and hone his skills by working for some of the leading home building and remodeling firms in the DC Metro area.

Later, George was recruited to be “Head of Construction” by a custom home builder that built large luxury homes and remodeled high-end homes. George’s roles were 1) overseeing the construction of, on average, six 9,000 square foot luxury homes a year and 2) managing the company’s entire home remodeling division.

When the demand for 9,000 square foot luxury homes waned, George joined one of the area’s larger Kitchen and Bath remodeling firms. Here, he supervised a large staff and hundreds of projects a year. George’s team generated many millions of dollars in annual revenue. In this position, George fine-tuned his expertise in remodeling kitchens and baths.

With George’s extensive experience and track record, another area company found and offered George a position he couldn’t refuse. The position, Director of Construction, offered George greater responsibly, and greater opportunities in many areas. It was a perfect position to round out his knowledge, skills, and experience before starting his own company.

After more than a decade working for other companies, George decided it was time to start the business he had always wanted. And so Metro Building and Remodeling Group LLC was born.

Today, George uses everything he has learned over the years helping homeowners remodel and build their dream homes.

George uses his experience, talents, and passion for helping homeowners to assure Metro is a first-class home remodeling and custom home builder. A company that provides homeowners superior home design, remodeling, and home building services. A company that listens to, informs, and treats homeowners the way George would want to be treated if he was the client. The type of company George envisioned from the start. The type of company he would want to hire to work on his own home.

A Bit About George Kall Beyond Work

George was born in York, Pennsylvania, which he called home until after graduating college. After college, he moved to Northern Virginia, where he saw greater career opportunities.

When George got married, he and his wife moved to Loudoun County, where they still live. Together they have a growing family with four young children. One son and three daughters that keep them very busy when not at work.

George has been active in sports since high school, mostly soccer, track, and baseball. But he also enjoys a round of golf when he can find the time.

Until recently, he coached a youth sports team and played in a softball league. Now his kids, who are all active in sports, keep him so busy doing his part shuttling them to and from games and practice that he has no time for coaching, softball, or playing golf. But George loves watching his kids play and helping them practice at home.

Now George keeps in shape by exercising in his home gym, and he enjoys his Peloton. And he also makes time to cheer on the VT Hokies and Washington Nationals.

Download Our Free Guide | 10 Tips for a Successful Remodeling Project

Have a project you’ve been thinking about?
Contact us for a free consultation and estimate.

MBRG finished our basement a couple of months ago -and we love it. They were awesome! They were very professional, always arrived on time and kept to schedule, and had great ideas. Plus George and the team are super nice and friendly. I would unequivocally recommend MBRG for your remodeling needs!

I had the pleasure of working with MBRG, for a deck, patio and landscaping project on our home. ... the work was outstanding, and exactly the enhancements we were looking for to our home. George Kall and his team were first-class professionals ... I would strongly recommend engaging with George and the MBRG team for any indoor/outdoor project needs, be it for decks, patios, basements, etc.

Excellent Job! George and the MBRG team exceeded our expectations. After a very difficult recent experience with a different contractor, we were definitely gun shy to move forward. George quickly put us at ease and went above and beyond to ensure quality and make sure our needs were being met. The process went very smooth and we are extremely pleased with the end result. Thank you MBRG. Well done!

I just used MBRG to finish our basement. They were awesome! They were very professional, always arrived on time and kept to schedule, and had great ideas. Plus George and the team are super nice and friendly. I would unequivocally recommend MBRG for your remodeling needs!

George and his team finished our basement over the 2016-17 holidays. They were highly organized, communicated very well with my husband and me, and did a beautiful job! I can't say enough about George's clear communication and organization. He stayed on top of every minor change so that we always knew exactly where we stood. And, his crew is great! I would go back to MBRG in a heartbeat.

George and his team finished our basement this past June. ...they did an amazing job. We love everything about it. They were great to work with and each night ... they cleaned up. They took their time and you can see that they really care about their work. The best part is, they helped us stay on budget. We would highly recommend George and his Team at Metro Builders.