This kitchen remodel was part of a larger project that was a major remodel of the entire first floor for a couple with grown children no longer living at home.

This kitchen remodel was part of a larger project that was a major remodel of the entire first floor for a couple with grown children no longer living at home.

The objectives for remodeling the home’s small kitchen, modest size dining room, and family room included combining them into one continuous space and totally remodeling the kitchen. To accomplish these objects, we started by removing several walls, including a large load bearing wall. To support the upper floor that was supported by the large wall we removed, and to keep the newly opened space free of columns, we use a specially engineered support beam. We hid the beam within a few inches of the upper part of the wall, the majority of which we removed.

The kitchen, which was very small to start with had a wall removed and a peninsular counter with bar stool seating replace it. This extended the visual and useful size of the kitchen. We used white stock cabinets with granite countertops for the kitchen including the peninsular counter. We also added a large gas cooktop and exhaust hood. One of the cabinets we installed included a double oven. We reconfigured and added more recessed lighting in the kitchen and incorporated a large existing skylight. The kitchen remodel incorporated a window over the sink which further gave the room a larger feel and which looked out into the home’s enclosed patio.

Type: Kitchen remodel that was part of a major first-floor remodeling project.

Click any of the photos to see full size. 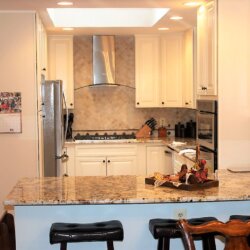 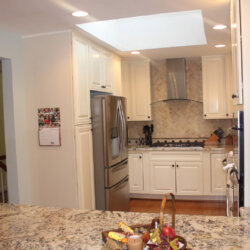 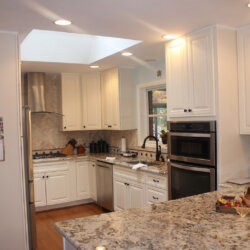 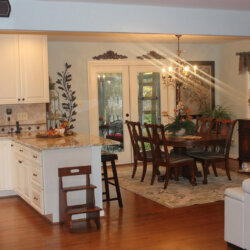 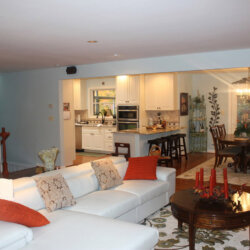 Learn About Our Kitchen Remodeling Services.

Learn About Our Kitchen Remodeling Process.

Download Our Free Guide | 10 Tips for a Successful Remodeling Project

Have a project you’ve been thinking about?
Contact us for a free consultation and estimate.